World War II Veteran Bob Persichitti visited Calkins Road Middle School for an early 100th birthday celebration as students sang to him, shared cake and presented him with birthday cards. As a guest presenter for the past nine years, students and staff have established a special bond with Mr. Persichitti and were thrilled to honor him in this way.

Born in 1922, Persichitti published his memoir, “Bob's Book: Building an American Life,” at the age of 93. He has been visiting Pittsford classes since 2013 when a Mendon High School student in an AP U.S. History class wrote him a letter to read during his Honor Flight to Washington, D.C.

During this special birthday celebration, Persichitti happily engaged with students, answering questions about his youth and reflecting on how things have changed during his lifetime. Currently in the process of writing additional chapters to add to his memoir, Persichitti talked about some of the daily routines he credits with playing a role in his longevity, such as exercise. As per tradition, Mr. Persichitti was driven around the bus loop so that students could express their appreciation with handmade cards and cheers as he waved from the passenger seat.

Born the son of Italian immigrants, Mr. Persichitti served in a Civilian Conservation Corp (CCC) camp in Idaho during the Great Depression and served in the U.S. Navy during WWII. During his military service, he was stationed in the Pacific and witnessed the Mt. Suribachi Marine flag raising at Iwo Jima in 1945. He returned to the Pacific 74 years later on a trip sponsored by the WWII Museum. He is active in the Honor Flight Rochester program and has worked to raise awareness and funds to send Veterans to Washington, D.C. to be honored and receive the kind of recognition many of them never received. After completing his military service, Persichitti was a skilled carpenter and high school teacher in Rochester for a number of years. 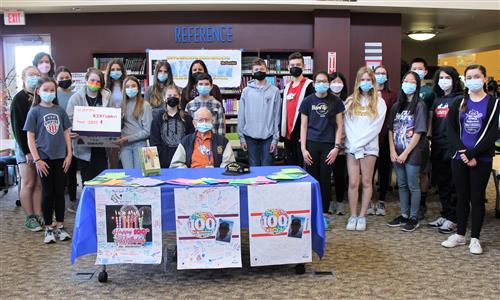